The Baby-Gate Search is Over! 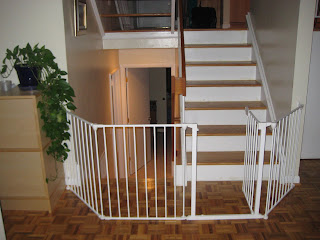 Well, it's up. After weeks of trying find a baby gate that would work with our strange split-level stair arrangement, it finally arrived, and it's up. It's humongous but completely necessary. This is really the only way that we could secure both up and down directions of the stairs, because of the configuration of the banister (and lack of anything to attach the gate to in the middle).

I actually like it. It's big, yeah, but that was a necessity for our configuration. And I like that there's a little landing so that you don't have to open or close the gate while on the stairs. Added bonus: it serves to lock the dogs out of our main living room (the floor from which the pictures were taken) during the day when we're not home, so we don't have to worry about them eating Sebastian's toys. They can go up or down the stairs at will, but can't get into the living room. Whee!

It's a Kidco Configure Gate, with one added section. It's well-built, sturdy, and actually looks pretty nice. It actually was a cinch to install, even adding the extra section. It was pricey ($150 for the gate and extension), but definitely worth the cost. It'll last, I'm sure of it...even through multiple kids and dogs. 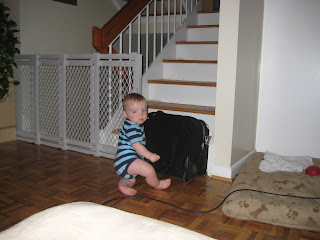 We've been operating for weeks with a sort of ghetto makeshift setup, using an old gate we used to use for the dogs, wedged in behind a filing cabinet, paired with something else to cover the remaining gap. Here is Sebastian, modeling the not-so-safe arrangement: "Umm, guys? You left this bag here in front of the stairs. Can you move it so I can precariously climb them, please?" 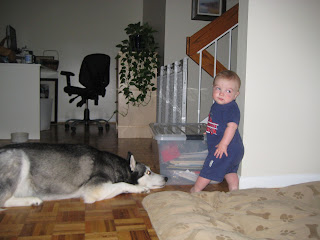 We always have an eye on him anyway, but especially recently, without a sure way to contain him. Other fun baby barricades included boxes, chairs, and dogs (the last option didn't work so well, as it wasn't the most, erm, immovable solution). Sebastian generally found a way to climb onto or over whatever we had blocking the stairs, however, and then grinned and cackled maniacally as he made his way up the stairs (one of us not far behind, of course). The picture on the left says it all: "Aiti, do you REALLY think a silly box is going to keep me away from my beloved stairs?" *eyeroll*

So, at least one of our four landing is secure. Yes, we have four landings. That's what comes from living in a house with five half-levels, I suppose. We live in baby-gate hell. The other landings are actually ok, though, for now. On the top-most level (the master bedroom), we have a door we can close to keep the stairs blocked off. On the middle level (where the two other bedrooms are), Sebastian doesn't have access to the stairs because his room is already closed off with its own baby gate. The kitchen/foyer-level landing is still a work in progress, but we have a makeshift solution there too, for now.

Eventually I think we'd like to get another gate like this one to go on that level. But it'll have to wait until we can afford another one, I suppose. For now, though, I'm pretty happy with this one.
Posted by Eliisa at 9:08 PM

Eliisa
I'm Eliisa, wife to Ken, Aiti to Sebastian (born August 4, 2008) and Oliver (born March 11, 2010). I'm also a speech-language pathologist, and work part-time for the local school system. The rest of the time, I'm at home with the boys, and love it.